Silver Medal for The Red Queen 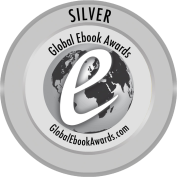 It was an exciting moment when I received the notice in August that my book won a Silver Medal in the Dan Poynter Global Ebook Awards for 2016!

Book awards mean a lot to authors. They validate our efforts and help bring our books to the 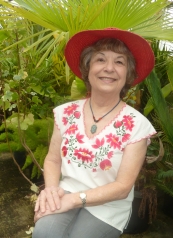 attention of readers and booksellers. The Mayan Red Queen has been given favorable reviews in The Midwest Book Review (2016) and by Writer’s Digest (2016), but this is her first award. So, I am very happy and invite you to share the moment by recalling the story if you’ve read it, or reading the book if not.

“The quality of this novel is top notch . . . beautifully written. The plot was interesting and very unique. The author’s best skill is in crafting believable yet mythical characters that carry the story almost effortlessly. . . fans of complex world building will be absorbed by this one–with pleasure!” Writer’s Digest 3rd Annual Self-Published e-Book Awards

Actually, what we know about her is limited. Archeologists discovered her tomb at Palenque in 1994, her skeleton completely permeated by cinnabar, a form of mercuric oxide that leaves a red residue. The Mayas used cinnabar as a preservative, but only for bodies of elite nobles and rulers. Her burial was richly adorned with jade, shells, beads, and artifacts of bone or ceramic, and her face covered by a jadeite mask. They determined that she lived in the mid-seventh century CE, died around age 60, and must have been highly regarded because of her interment inside a large stone sarcophagus.

Later  research determined that she came from a nearby city and was unrelated to the ruling family of Palenque. When hieroglyphs were deciphered at Palenque, we learned that she was married to the famous ruler K’inich Janaab Pakal in 626 CE, bore him three or four sons, and died in 672 CE. Her memorial pyramid adjoined the soaring Temple of the Inscriptions in which Pakal was buried. Because of her red skeleton, she was called “The Red Queen” by archeologists. Her Mayan name was Tz’aakb’u Ahau, “Maker of a Progression of Lords.” And she certainly did produce a succession of lords, as two of her sons became rulers after Pakal’s death, and a third son fathered the next ruler, Pakal’s grandson.

These scant facts underlie my story about Tz’aakb’u Ahau, whom I give the birth name Lalak. Fleshing out her personality, her hopes and fears, her emotions, and choices she made through her life was my challenge as a writer of historical fiction.

Lalak in my story lived over thirteen centuries ago, but her yearnings and challenges would sound familiar to modern women. She wanted to fit into her new city, find acceptance by her new family, fulfill her obligations in life, and most of all, win the heart of her new husband. What makes Lalak’s situation different is that she faced an arranged marriage with the most powerful young ruler in that Maya region, who just happened to be in love with someone else. Lalak was immediately attracted to him and loved him deeply, but he remained distant. She learned that her mother-in-law had banished the woman he wanted; choosing Lalak as his wife in the hope he would never love her – a homely, shy, and naive girl. Lalak came from a small outlying city, and although she had pristine blood lines making her eligible for such a match, her childhood was chaotic due to family enmities and she lacked preparation for high court protocols and intrigues.

Poorly equipped to meet such challenges, Lalak struggled to find her place and understand the dynamics of Palenque’s ruling family. She suffered under her mother-in-law’s criticism and faced repeated losses through miscarriages. She must grow from a naive and innocent girl into a strong woman capable of fulfilling a queen’s role. Her quest to find a way into Pakal’s heart required developing her feminine powers and expanding her wisdom, assuming her rightful status by facing down her mother-in-law and gaining respect from the sophisticated nobles of her city.

As Lalak‘s story unfolds against the rich backdrop of the Maya Classic Period, you will be immersed in fascinating aspects of Maya culture. There are frightening Underworld journeys where Death Lords hover, calendar rituals requiring the ultimate offering of one’s own blood, and use of sexual alchemy to resurrect lost portals to the Gods and Ancestors. Details of daily life contrast with the dazzling opulence of high court rituals, herbal and healing lore mixes with the sensuous dance and gastronomic delights of feasts, and the amazing advanced knowledge the Mayas had about building construction and astronomy is revealed.

The Queens of Palenque

I became fascinated by women rulers, “queens” in European context, when visiting the ruins of Palenque. This popular tourist destination is set in deep in tropical jungles of Chiapas, Mexico, partway up a high mountain range. Palenque is perhaps the most beautiful, artistically rich, and mystical of Maya sites and contains a huge number of hieroglyphs. These intriguing glyphs of Classic Mayan language provide one of the most complete dynastic histories, carved on panels, tablets, and painted on ceramics. I was enthralled by seeing the Red Queen’s tomb and sarcophagus, and found a book in Spanish while living in Merida called La Reina Roja by Adriana Malvido. Adriana is a Mexican journalist who covered the story of the archeological team that uncovered this hidden tomb in Temple XIII. Fortunately, I read and speak Spanish, and this gem gave me invaluable background. Following leads in the book, I researched the four great queens who the team considered candidates for this burial:  Yohl Ik’nal, the grandmother of Pakal; Sak K’uk, the mother of Pakal; Tz’aakb’u Ahau, the wife of Pakal; and K’inuuw Mat, the daughter-in-law of Pakal. I was inspired to write the stories of these four queens, possibly the most powerful women in the Americas, but unknown outside of archeological circles. A lot more study, field trips, and research both in Mexico and the U.S. were required to set their stories in historical context. Three books are finished and published as ebooks; the fourth is in process. My plan is to also publish them as print books, and Book 1 (Yohl Ik’nal) will be released on November 1, 2016!

“This is historical fiction at its best, a mesmerizing tale that transforms an archeological mystery into a complex and fascinating flesh and blood woman.”

“This is a novel that beautifully blends history and fiction in an unforgettable story with a mesmerizing and powerful female protagonist.”

If you enjoyed this post, why not join my blog-newsletter? 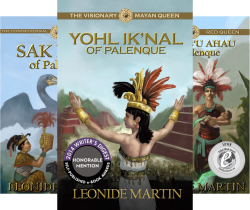