Today, November 27, 2020 is Native American Heritage Day in the United States. It’s the day after Thanksgiving and offers a different perspective on the indigenous peoples living across the northern continent. Contrary to popular colonial myth, the continent was widely settled far in advance of the Pilgrim’s arrival in 1620, and the southeastern cultures were particularly advanced hundreds of years earlier. The Adena and Hopewell civilizations lasting from 800 BCE to 500 CE were the first to build large cities and impressive earthworks in areas spanning the current states of Ohio, Kentucky, Indiana, and West Virginia. We do not know the names these indigenous peoples called themselves; Adena and Hopewell were given to them later based on local settlements in their regions.

At the same time as the height of Roman Empire (100-476 CE), there were thriving civilizations in North America. The extent of their trade network spans the eastern half of the United States, rivaling that of the Roman Empire. Massive earthwork enclosures built by these peoples are the largest collection on the planet, yet their construction still a mystery.

Adena.  Existing for about 900-1000 years, the Adena began mound building in central and southern Ohio regions. This evolved from prior practice of burying dead in piles of shells alongside rivers, including pet dogs, then moving to burials in large mounds of earth along with funerary objects such as jewelry, art, and ceramics. The Adena were notable for an extensive trading network which supplied them with copper from the Great Lakes to shells from the Gulf Coast. They developed agricultural practices, pottery, and artistic works although still living semi-nomadic lives and relying on hunting and gathering. Some Adena mounds—actually pyramids—were very tall and conical in shape, the highest being 65 feet tall at Miamisburg, Ohio. These pyramids were smooth on top and capped with clay, beginning as mortuary buildings which were ceremonially burned, then layers of burials placed on top followed by a new mortuary structure, and the process kept repeating.

Adena people lived in small settlements of one to two structures; houses typically built in a circle ranging from 15 to 45 feet diameter. Walls were made of paired posts tilted outward, joined to other wood pieces to form a cone shaped roof covered with bark. The Adena had stone tools and axes, bone and antler tools, spoons and other implements. A few copper axes were found, but metal was generally hammered into jewelry such as bracelets, rings, and pendants.

Hopewell.  Descendants of the Adena, Hopewell culture epicenter was Ohio starting at 100 BCE and lasting until 500 CE. Hopewell were masters of land survey and geometry, continuing the Adena custom of earthworks and mound-pyramids but vastly enlarging it. They extended the trade network from the Crystal River Indian Mounds in Florida to the northern shores of Lake Ontario, the Gulf Coast, and from the Mississippi River far to the east, but did not have much influence on the East Coast. From these regions they obtained mica, copper, shell, and soapstone. They produced beautiful artwork and made stone pipes in shapes of effigy animals, smoking tobacco and perhaps other substances.

The name Hopewell came from mounds excavated in 1891-92 by Warren Moorehead at the property of Mordecai Hopewell in Ross County, Ohio. The Hopewell built earthworks in clusters of 10-20 mounds or more in same area. Once there were tens of thousands, but Hopewell mounds now only number in the hundreds due to encroaching development, both farmlands and towns. Many remaining earthworks are now preserved in parks and historic sites.

The great Hopewell geometric earthworks are among the most impressive indigenous monuments in the U.S. They take various geometric shapes and rise to amazing heights, often shaped like animals, birds, or serpents. There are gigantic enclosures bounded by berms of earth that are 20 feet wide by 20 feet tall. These often covered 20 acres (15 football fields); and could hold 17 pyramids of Giza inside. Some reached 50 acres and the largest is 111 acres at the Hopewell site. Maps and drawings made in the 1840s document earthworks, many that are now destroyed, but some have been preserved at the Hopewell Cultural Historic Park. 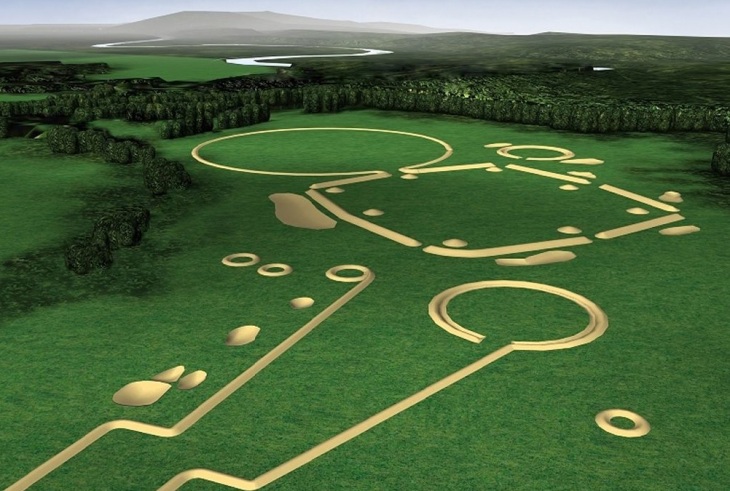 Mystery of Massive Earthworks.  An impressive level of coordination was needed to build all these earthworks, spread over a large region and using the same geometric principles and formulas. One repeated measurement is 1053 feet, appearing in different parts of structures—some square, rectangular, octagon. Many areas have enclosures of 20 acres, and squaring the circle or circling the square was used repeatedly. Hopewell structures were built so measurements of a square fit inside a circle and vice versa. Such repetition shows that there was clear intentionality in building. But who organized the labor forces to build massive geometric earthworks?

Hopewell villages were small and the people did not live near the earthworks. Villages were a few miles away, rarely had more than 100 people, houses were simple rectangular (occasionally circular) shapes made of wattle-and-daub with grass roofs, holding 1-2 families. Diet was simple, with small scale agriculture augmented by hunting and fishing. They did not have corn, cultivating native plants like pigweed, sunflowers, maygrass, and goosefoot. These were egalitarian settlements without large differences between houses denoting different social status. There is no evidence of a chief or ruling class. There was some class differentiation seen in burial placements inside mounds and amount/types of burial artifacts. The largest burial mound is at the Hopewell site, three interconnected structures 500×180 feet, and 30 feet tall at the base. Following Adena practices, these mounds started as mortuary structures, then were burned and burials put on top, taking place over years and decades. The most elaborate burials were in the center, the earliest phases. Multiple burials were interred at once; bodies must have been stored for a while before being interred. Group burials were not due to war and there is no evidence of violence or warfare in Hopewell archeology. Burial pyramids grew in size over time, then were capped with hard surface and temples built on top.

Hundreds of workers were needed, along with persuasive leaders to accomplish these works, but archeological evidence shows only small egalitarian villages. According to archeologist Edwin Barnhart‘s theory, these small, peaceful villages banded together to create the earthworks, probably as gathering places for celestial timed ceremonies. Building the earthworks in itself was the ceremonial event. They gathered together every decade or two, timed to lunar events, as a single people to create something great and enduring. Such shared effort in raising monuments is powerful builder of community. (ArchaeoEd Podcast Episode 3 – The Hopewell) 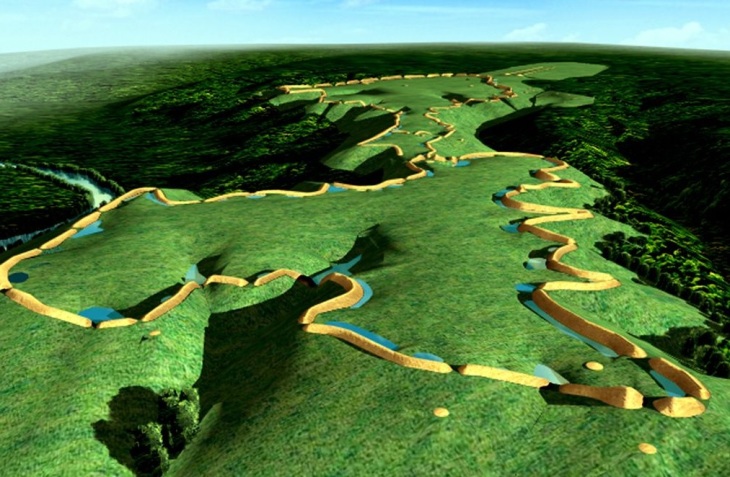 Astronomical Aspects of Hopewell Earthworks.  Hopewell earthworks encode knowledge of astronomy focusing on solar system objects; known as “horizon based astronomy.” This takes note of the rise and set of the sun, moon, and planets, all visible to the naked eye. The Hopewell made solar and lunar observations, and several earthworks align to winter or summer solstice: Hopeton, Dunlap, Anderson, Mound City, and Hopewell site all have solar alignments through diagonals, not sides of the squares. At times they had to make adjustments for mountains; the Marietta site has mountain ridges so they used astronomical knowledge and land survey techniques to compensate in aligning with solstice.

Octagon sites at Newark and High Bank did not have solstice alignments, but instead followed movements of the moon. The many angles of the Newark octagon captured all lunar alignments. Lunar maximums (maximum excursion along the horizon) occur every 18.6 years at full moon. This moon cycle of lunar maximums and minimums was captured by Hopewell. It takes years to determine this; there are 4 such alignments in a full cycle, 2 maximum and 2 minimum. Different lunar alignments were used at the High Bank site octagon.

Lunar Aligned Earthworks at Newark Ohio. This spectacular lunar alignment at the Hopewell site in Newark, Ohio (built between 100 BCE – 300 CE) includes the 1200-foot-diameter Great Circle with its steep inner ditch and monumental framed gateway, plus the Octagon Earthworks, forming a perfect circle and adjoining octagon over a half-mile across. The perfectly formed, eye-level embankments align with all eight of the key rise- and set-points of the moon during its 18.6-year cycle, within a smaller margin of error than that at Stonehenge.  World Heritage Ohio.

Cultural decline: Around 500 CE, the Hopewell stopped building mounds and earthworks, their trade exchange ended, and their art was no longer produced. Rising hostility is a possible cause, since villages at the end of the Hopewell period became larger communities that built defensive walls and ditches. Climate change with colder conditions probably drove game animals north or west, and had detrimental effects on plants, drastically reducing these food sources. The bow and arrow were introduced during this time, improving hunts but further depleting game. This effective weapon made warfare more deadly, driving people into larger fortified communities. With fewer people using trade routes, the network linking people to the Hopewell traditions diminished. Full-scale agriculture after introduction of corn might also have contributed to breakdown of social organization. Conclusive reasons for the dispersal of these prodigiously creative people have not yet been determined. (Wikipedia, Hopewell Tradition)